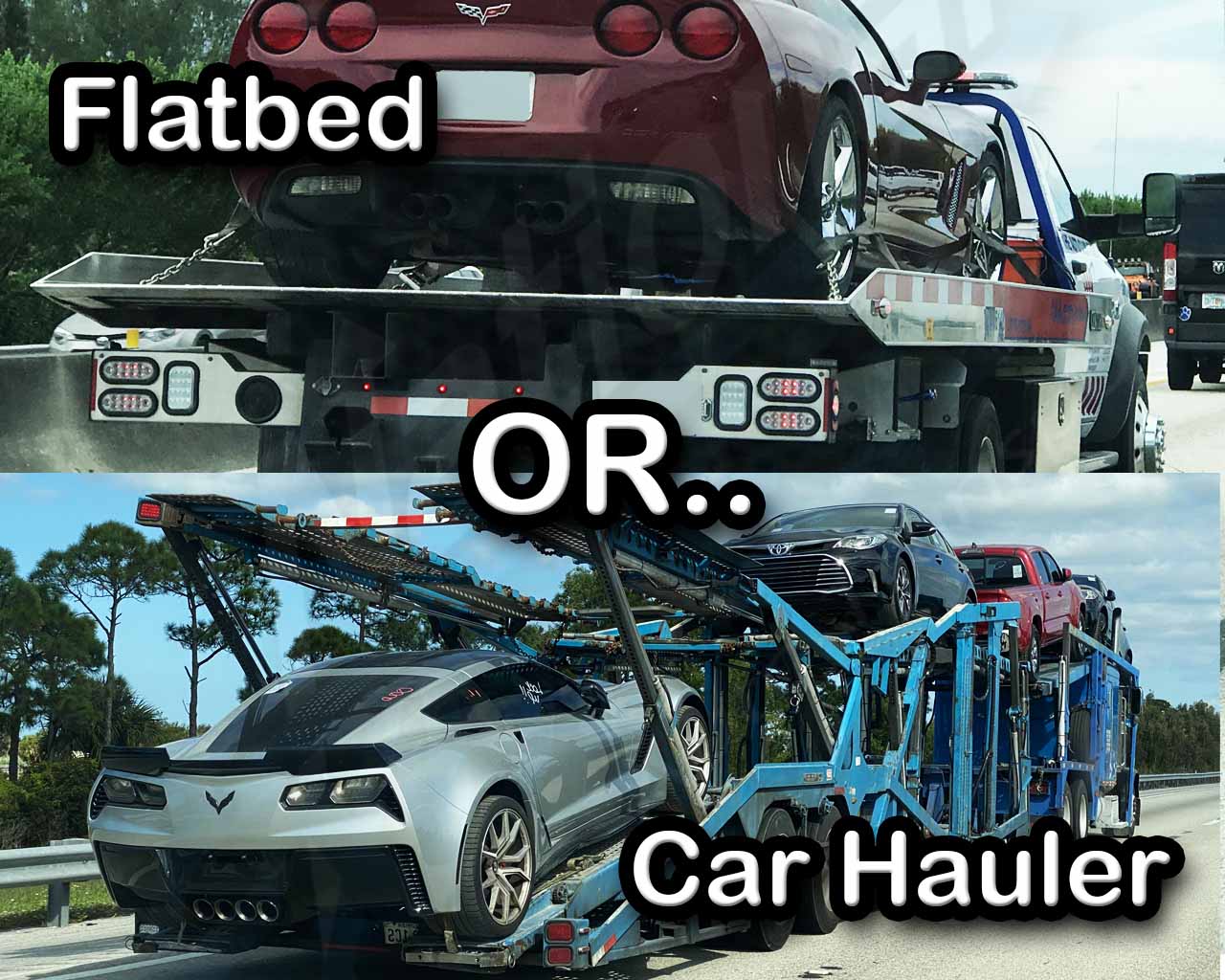 When it comes to auto shipping, you may wonder which is better. Is it using a flatbed truck (also known as a hotshot or single car transport) or a car hauler?

Each type has a purpose they lean towards although they both do the same kind of job. But for most who work with an auto transport company, car haulers are the more common type of truck used. This is known as open carrier auto transport. Car haulers have several ramps that can accommodate multiple vehicles at once. As most carriers make money moving multiple vehicles at once, this is the standard for state to state car shipping and cross country auto shipping.

Flatbeds, on the other hand, have a long surface that can only transport one or two vehicles at a time. A flatbed truck can be used for short-distance haul and some actually do use them intrastate transport regularly. However they are mostly useful for picking up stranded vehicles, shipping inoperable cars locally, and moving a vehicle from a dealer to another local dealer.

Flatbeds can also take cars that need to be winched more easily because the bed comes down partially to the ground. They are also smaller than car haulers so they can scoop up vehicles in residential neighborhoods with greater ease.

A flat bed truck should not be confused with a low boy or step deck. Both those can be used as car trailers pulled by a semi or dually pickups but are not a flat bed. Flat beds are usually commercial trucks with channel frames and a hydraulic flatbed system placed on the frame.

Car haulers are more commonly used for long distance car transport. As mentioned these car trailers can have multiple levels or be single levels with different configurations. Although they are great for dividing the cost to transport each vehicle during long distance car shipping, they can be around 70 feet in length, which can make it difficult to deliver in tight residential neighborhoods.

Aside from the very widely known two story 8-10 car hauling setups with ramps, you can see others like the wedge car hauler or the tilt bed car trailer. These are very useful for tall vehicles like high roof vans, ambulances, bucket trucks, and more.

There are at least 9 different configurations of haulers than range from specializing in hauling cars to oversized cargo such as box trucks, heavy equipment, or even a crane.

There are a few other key differences between flatbeds and car haulers that you should be aware of before choosing a truck for your auto transport needs.

Flatbeds are generally more expensive to hire than car haulers for long distance transport because they cannot ship more than one or two vehicles at once. That's a great example as to why local tow companies charge higher fees than auto transport companies.

Flatbeds have the advantage of being able to transport taller vehicles, such as modified trucks and cargo vans but again, take one or two vehicles only so are best suited for short distance as there are car haulers than can accommodate tall vehicles too.

Car haulers are still used for local transport. Taking two or three cars from a terminal to a port would be cost effective because multiple vehicles going to and from the same place.

A car hauler will likely be more available than a flat bed when it comes to an auto transport company.

You May Not Be Able to Choose, But May Not Need To

Some may believe it's better to have their car all on its own with a flatbed, however this always not the case. Sure, they can deliver a little faster to deliver with just one vehicle. And yes, they are smaller so they do fit in more places. However, the time you may take for you to wait to find one could easily outweigh the slightly faster shipping time and better accessibility.

That is of course considering if it's a short distance transport. For long distance across states, most flatbeds are not going to have interstate licensing since they primary operate locally. So chances will likely be slim to none to have a shipping company procure it.