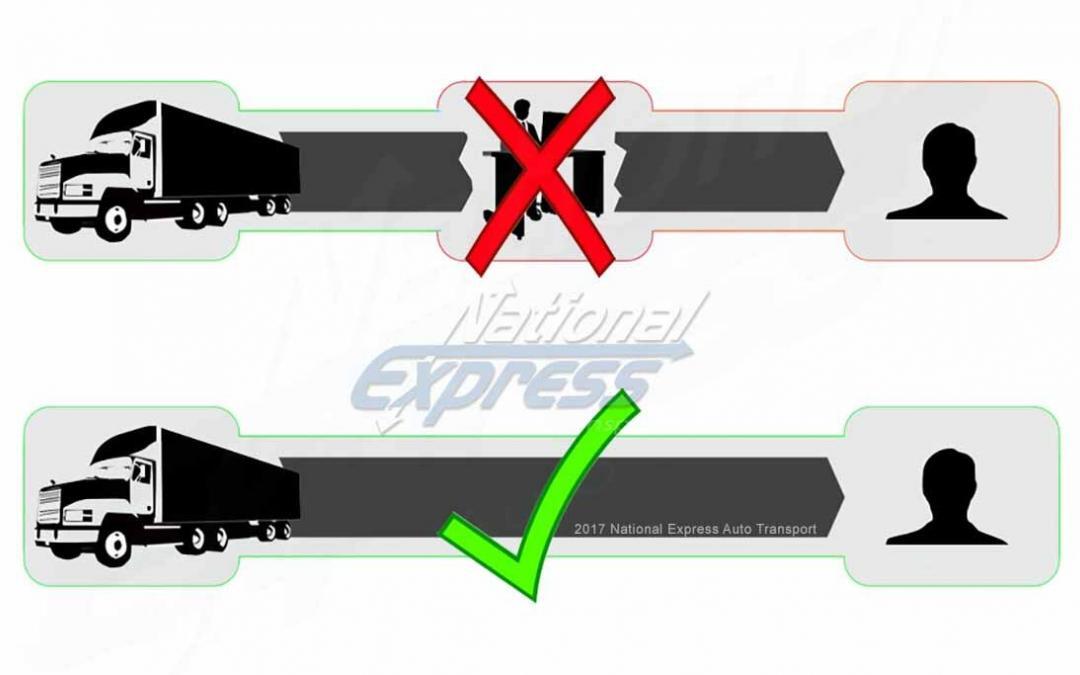 Most are looking for a direct resource for car shipping that will not involve a middle man. In this case it is the auto transport broker that stands between you and the carrier. They arrange cars to be shipped by posting it on a national board, and the carrier actually does the moving of your vehicle.

This is why there’s always an “estimate” of pickup, or an “average” for how long it will take to arrive.  Because the guy on the line isn’t the one moving the car, they are trying to see who to move the car with.  Until a carrier comes forward to pick up the vehicle, there isn’t an answer to that question.

So why is it so hard to bypass that party in the way of you and the carrier? Well, 90%+ of the business is structured that way, Then another layer that is also above that in some cases will be broker referral services which even put you farther away from you and directly dealing with the carrier.

Why Are There So Many?

The shipping of cars is big business. There are literally thousands of carriers moving vehicles at any given time anywhere in the country. So with so many carriers on the road you would think it would be easy to find one to deal with directly.

More Carriers than Ever

That is actually less true than it has ever been in the history of this business. There are many carriers but the middlemen are the ones getting business for those carriers.

More Middlemen Than Ever for those Carriers

It’s thanks to the interconnectivity of technology. This has made more opportunity for the broker and the owner-operator to work in tandem. Someone owns and runs their own truck will work with the broker (middle man auto transporter). The hundreds of middlemen (brokers) actively looking for customers like you. They give these owner-operators more vehicles than they need.

Bringing it all together are the vehicle load boards. It’s a marketplace where owner-operators and middlemen can list and accept vehicles to transport.

There are a few, but the most popular is Central Dispatch. Thousands of cars are moving daily there.

To Avoid or not to Avoid the Middle Man?

… that is the question. And the subject is a matter of debate depending on your experience with auto shipping. It is a well-known fact this business is filled with terrible options. So before we get into that, let’s go over some facts about those that are and those aren’t middlemen.

The typical path for someone looking to get away from from dealing with a 3rd party would be to start with maybe local listings. But there you are just covering truckers that only travel in the state or actually are just towing companies. Your next step after that is going to be to start calling those you find online through Google but you’ll see that anyone that is truly dealing direct does not go anywhere near your pick up or your destination. The ones that do outsource it the same way. They are the middle man for everything except perhaps one or two routes but of course aren’t going your way. Yet they advertise themselves as a carrier wasting your time. Starting to sound for familiar?

It’s kind of like comparing this to your favorite product that is sold at a variety of stores. You often think you can save more money by going directly to the manufacturer’s website. Thing is you’ll notice that when you go there it’s at full retail value. Shipping isn’t as fast, and the options of availability could be limited. It’s almost like they don’t want you to buy from them directly. This is the case with the trucker.

Truth be told, you could narrow down a direct option if you try hard enough and the route is popular. You could maybe try searching for your route with the word auto transport or carrier in it and maybe their list of routes will be indexed by the search and you can actually pick a carrier. That’s one way.

Another way is to call each company you are interested in using. Before they pitch you anything, ask them if they are a middle man and it is actually not allowed by the FMCSA for someone to tell you they are a direct carrier if they are not. If they say yes, ask them if they travel from your location to your destination and if it is their truck that does it. This will help you determine if they do the same thing anyone else would do and that is outsource your transport. They very thing you don’t want!

But, for everyone else that just wants good service from an honest company,  the main thing that you can emphasize on is what people are saying about who you were thinking of working with middle man or not. A quick search will always reveal comments left about who you were considering working with. That is all it really boils down to.

What to Stay Away From

Read about this in detail with this post on getting multiple quotes. Definitely avoid companies that are not auto shippers at all. These are broker referral services or also known as lead providers. They are websites that look to be an auto transport company or even a carrier but will not have anything to do with actually shipping your car or even arranging for it.

They simply take the information you fill out and sell it to dozens of tiny companies that are usually one man broker operations. This is where 99 percent of every complaint and nightmare story you hear of originates from.

The reason for this is that there’s no liability or no reputation to keep for the smalltime brokers. They simply close up shop and open a new company every time they get too many complaints online. Meanwhile the referral service you use never even gets a complaint because they are long forgotten. You may have filled out information with so many that you don’t even know where the call came from to begin with. An easy way to spot a referral service or lead provider is by the lack of reviews anywhere for them.

Avoid Middlemen that have Little or No Reviews

Which brings us to another thing you should avoid. Make sure that you have plenty of good reviews backing up the company you have picked out. At least more than a few and probably spread around in a variety of different websites like Yelp, Facebook, Angie’s List, and Google. Those sites are very strict on screening reviews that look manufactured, which is good.

Some Middlemen that Buy Reviews

There will be companies that have a ton of reviews, we’re talking about in the hundreds. Keep in mind that there could be an incentive program in place for those reviews to be left, perhaps a discount on their deposit or some other sort of incentive. These are not genuine.

Don’t go with the Lowest Price

If you do go with the middle man, make sure you avoid the absolute lowest price. We mention this several times throughout our blog and website. It’s really the truth. Because usually the lowest price is going to be the one that leaves you stranded.

Have questions? Call us today. Call 800-284-7177 or use our car shipping calculator to get an instant, DIRECT quote from an auto transport company.

The Complete Truth About Auto Transport

How much does it cost to ship a car to Hawaii?

The 302 Cu.In Engine from Ford & Chevrolet

The 400 Ci Engines by the Big Three