The 5 Longest Interstates and How They Were Built 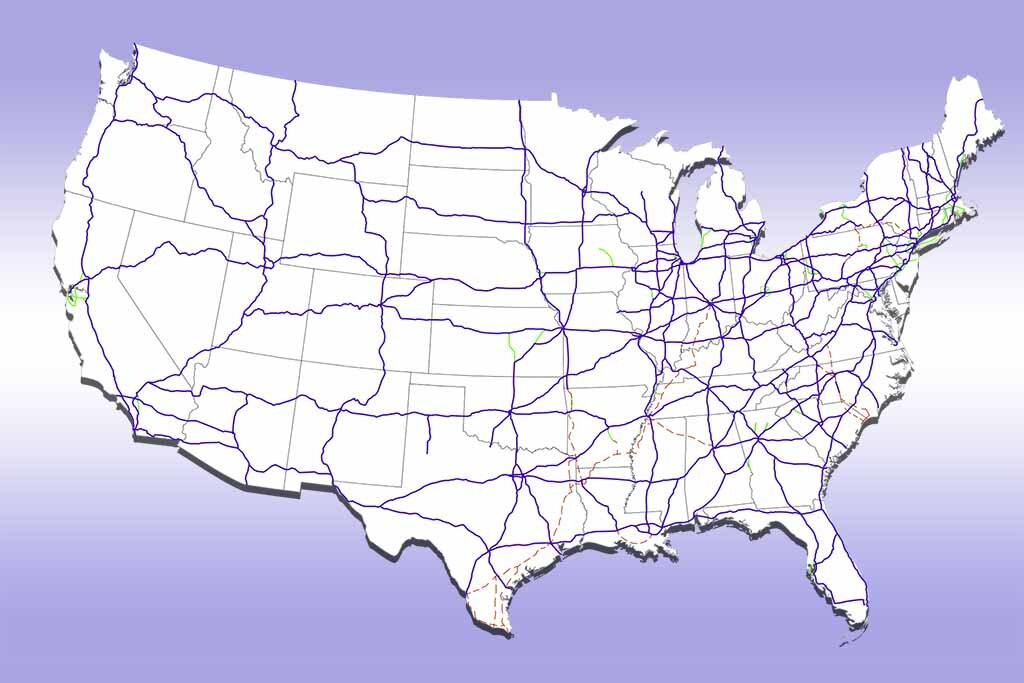 The US Interstates are the highway roads which were built to cater for driving and of course transport of goods in the US and the bordering countries. Being part of President Eisenhower's plan to create a transport system, he believed was necessary for the realization of economic growth of all the states in America. Auto transport is one of those industries powered by these huge highways. Furthermore, he believed that the roads would come in handy in Defense of the country. In 1956 authorization and commencement of construction for these roads was granted by the Federal Aid interstate highway act of 1956. It was meant to take 35 years for all the construction of the road networks which were covering over 47,000 miles in all directions in the United States.

Also known as I-90, interstate 90 is the longest highway roads in the USA. Furthermore, it is a transcontinental highway stretching to bordering countries and continents. It covers over 3020.54 miles. This road interconnects so many states. In Idaho it opened in 1961 after completion. Though there were much of the restructuring of the road in Idaho mountains part of downtown was approved in 1976 by the leaders of the state and further supported by the federal government that funded the construction throughout. Montana, is proud since the longest stretch of this road passes through it. It is approximated that over 551miles of the road is found in Montana. The road enters Wyoming states from the in north after Montana. It starts at a small town called Sheridan heading southwards to the mountains of Bighorn. In South Dakota it goes through the Rapid City.

This is one of the transcontinental Highway that runs across San Francisco to New York City in the area of Metropolitan. It was designated and designed as part of the national interstate highway system in the year 1956. After completion of the last segment in 1986, the road was officially commissioned for traffic. It is the second longest just after I-90, covering 2899.54 miles. Just like the 1-90, this road passes through some of the major states such Sacramento, Oakland, Salt Lake City, Toledo and Omaha. The last segment of the road saw the marking 30 years of the interstate construction plan. Before its construction there was massive studies of the geological aspects of the designated areas in which the road was intended to pass. One of such famous books was the book titled Basin and Range. In this research book, geologist John McPhee reveals the structures and the terrains in which are mapped in the book.

Unlike other interstate, this road stretches from East to West of United States. Covering over 2555.10 miles, this road cuts across some of the major states and cities in the US. It is the third longest after I-80. It goes through the following routes: in Arizona, it stretches over 359 miles. In New Mexico it covers 374 miles and goes through major towns and cities like Grants and Gallup. In this state the road has a speed limit of 120km/h unlike other states like California which has a speed limit of 112km/h. in Oklahoma the road covers a distance of 331 miles. Throughout Oklahoma it passes through Yukon, Midwest City, Okemah, Shawnee and so many other towns and cities. One of the states in which this road makes a major landmark is in Tennessee. Crossing the Hernando De Soto Bridge it crosses the Mississippi river into Memphis. It one one the road’s section that has the longest stretch of 445 miles. In Albuquerque , New Mexico, the road was part of the road replacement of central avenue. Nevertheless an alternative route was chosen for construction of the road section. In the state of Memphis the construction of the road section was met with a lot of opposition from some of the environmentalist that sued the interstate highways road construction authority in the court. However, the course did not stop and eventually the road construction continued. After the court battle there was need to create an over loop for the road construction work not to destroy the park.

Being one of the major interstate found on the southern part of the United States, the road covers over 2460.34 miles. It is the fourth longest interstates roads. Just like the other three longest roads it cuts across some of the major southern states and cities. It was originally mapped out in the federal plan of the interstate Highway plan. It passes in California covering a distance of 63 miles. Popularly known by the locals as Santa Monica Freeay the road has some of its section named after icons that Sonny Bony, a congressman and an entertainer. In Arizona, the road is designated as part of Arizona state memorial freeway. Phoenix portion of the highway is named Papago freeway. From the I- 17 terminus the road is designated as Maricopa freeway. At Louisiana the road covers 18 miles.

Also known as I-75 this is the fifth longest road in the United States of America. It cover a distance of 2250.13miles. it stretches from south east part to north east part of America. The road begins its journey towards north from the state of south Florida. Originally constructed as a dual carriage road, later it got constructed as a four way road for ease of traffic that increased rapidly over the years. In the recent time the state of Florida made some changes on the road and now it has a sequential plan of exists unlike the mileage plan of exist in the previous years. There are many future plans for the expansion of the road to meet the modern roads structures and give the users a better traffic experience. In addition there are plenty of services on the section of this road with each terminus designated with resting benches for travelers. There are travel directions for all the travelers to assist with better travelling experience while using the road.