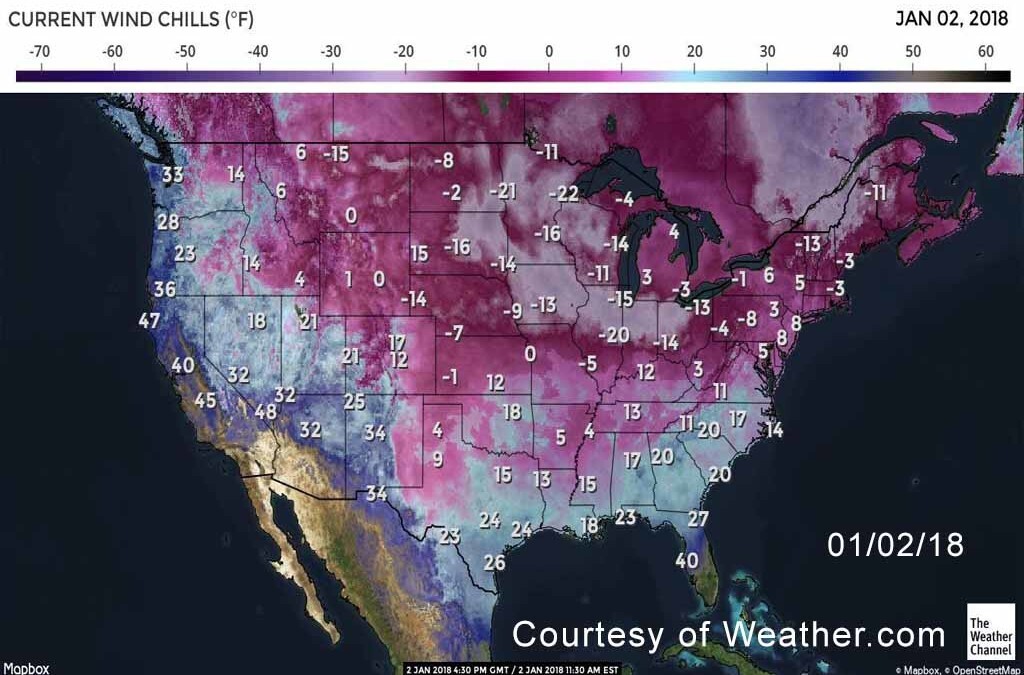 Auto transport for a good majority of the country is on hold for the next couple of days due to harsh weather conditions affecting various states across the nation.

These conditions are being called an “Arctic Outbreak” by The Weather Channel, which is a name that is very well-suited for what’s going on right now in a large part of the country. States such as New York reporting temperatures as low as -13°F upstate, and 14°F for NYC as per NBC New York. However, the states that  border in Canada are by far not the only ones that are suffering. The chill is covering over 75 percent of the country. Popular auto shipping states everywhere are at a halt. Illinois is at -5° F in some areas.WGN9 in Chicago is reporting -3° F for the windy city. Indiana, with its main hub Indianapolis being at 0°F with severe wind chill warnings. Even states as far south as Texas are not free from the cold either with temperatures as low as 4°F. Kansas and Oklahoma are facing temperatures as low as 12°F. Southwest temperatures in Nevada are at 18°F. Even Florida is at 40° which might see cool weather for a week or two out of the year at times.

If Your Vehicle is Waiting to be Shipped

Patience is the only thing we can recommend at this point. Hydraulics on these trucks will freeze when lifting and lowering vehicles at these extremely low temperatures. Truckers are not safe transporting your car anywhere with ice on the road and harsh weather conditions that can make them a danger to themselves, those on the road, and your vehicle.

Delays with flights and plans that depend on your car being transported may require that other arrangements be made. As it is when temperatures are extremely low planes are grounded but in the situation of there being a lack of transport available (after the weather gets better and scheduling begins again) it is always important to have a backup plan. If you’re getting on a train or a plane make sure that you have a friend or family member hold onto the vehicle for you and update that address with your shipper. Don’t scramble making phone calls and double book as all carriers follow the same safety rules. It’s at times like these that less than reputable companies will try to overcharge customer desperate to get their vehicle moved.

This is a rough weather start to the new year for everyone but we hope that this big chill passes soon. If you have any questions whatsoever please give us a call 800-284-7177.